Me, Osho or Existence?

The birth of the music for the No Dimensions Meditation

Not long after the first photo shooting (story on my previous note: Let’s put the fan on now!) I came to know that Avikal and I would have the privilege of having another photo session with Osho. ‘Wow!’ I thought, ‘Does life get any better than this?’ In fact, it did.

I distinctly remember one night in Buddha Hall, during that month, Osho talking in discourse about the Four Directions Meditation, a meditation that we had been practicing in Buddha Hall for several years. The original author of the music – I believe somewhere in Germany – was claiming copyrights on the meditation. Osho said that the movements were ancient Sufi movements and nobody could have a copyright on meditation. He also said that the meditation would have a new name, “No Directions Meditation,” and he said that consciousness is a circle and as such it has no directions and therefore this new name was more appropriate. A few days later, the name was again changed to “No Dimensions Meditation,” and I heard that they wanted some of the sannyasin musicians to create a new music for it.

The last thing that I would have ever thought, hearing all this, was that I would be involved in this process. I mean, I was not even considering myself a musician at that time, I was a fashion photographer!

Well, this is how photography brought me to music via Osho: When the second photo session came, a month later, I had learned my lesson and, in order to avoid having to tell Osho to ‘do something’, we prepared a different set. He would sit on a big pillow on a carpet, surrounded by musical instruments like bells, gongs, Tibetan bowls, and even a guitar, so that he would have something to play with while we were taking pictures. In this way we wouldn’t risk to take the same picture 60 times because he was not moving, as it was happening in the first session. 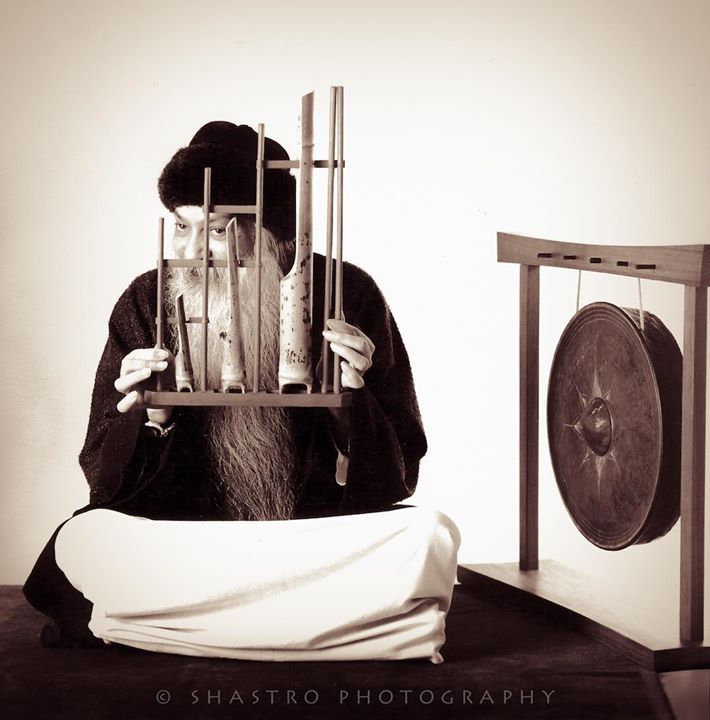 The shooting went very smoothly, and he seemed to really enjoy not only playing with all those toys but also scaring Avirbhava, as he used to love doing in those days. As a matter of fact I took the above shot while he was intensely looking at her, shaking the Angklung (the Indonesian bamboo instrument) and she was flat against the opposite wall screaming like hell! It was indeed a very fun and quite dynamic session.

When at the end everyone left the room, I was left alone. I needed to take a little time to unwind from the intense energy of the session, so I sat down on the pillow where he had been sitting a few moments earlier, picked up the guitar he had just played, and started picking on its strings. A very simple and hypnotic tune came out immediately. I loved it. It sounded so familiar, and it drew me into itself making me soon lose the sense of time. When I finally got up, I was surprised to notice that almost an hour had passed! I left the room, but that tune followed me and stayed in my head for several months to come. When I later went back to Europe, it was still playing in my head, and I kept hearing it in all kind of different rhythms and variations. I finally thought that if I could put it down on a tape, maybe it would leave my head and I could eventually be free from its tyranny!

A few days later I happened to visit my friend Sirus, a Persian musician, who at that time was living in Parimal, an Osho center in the North of Germany. He had a small Tascam four-track cassette recorder, very funky, and I asked him if he would like to record something and that, as a matter of fact, I had a certain tune that I thought we could play together. In those days Sirus was very involved with setting up a plumbing system (he is also an engineer) for the new Parimal restrooms, but he happily agreed to let me record in his room. I played flute (my very first flute recording), tablas, and guitar, and when Sirus had some spare time, in between plumbing sessions, he would come in and play his beautiful violin and his setar (an Iranian string instrument) on the tape. That’s how the temporary title for the tune became “The Whirling Plumbers.” 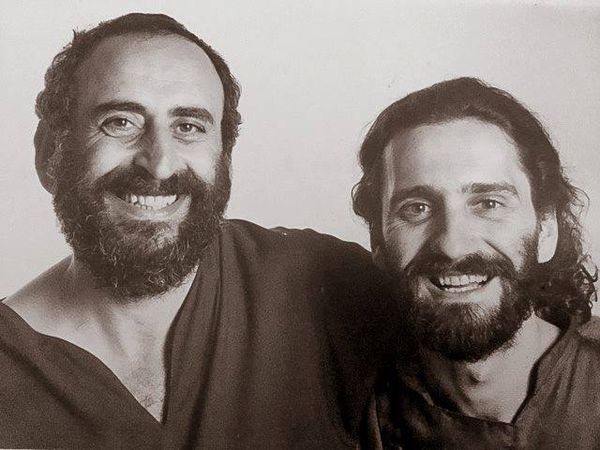 It was my first recording and when I listen to it now, I can hear that it is technically very funky, but I can also hear an incredible and mysterious energy force in the music that I had no idea at that time was even there. The recording was done in a few days, and we were both very pleased with it. It turned into a 40-minute track, with a haunting melody and rhythm.

Listening to the final recording one night, Sirus said to me, “Hmm…you know, I talked on the phone the other day with our friend Zahira. She is here in Germany, leading a Sufi group in a Osho center, and she told me that back in Pune, a month ago, they asked her if she could look into finding some new music for the Osho No Dimensions Meditation. Do you think this could work for that?”

Only a few days later Zahira called us up, all excited, and she told us that during her group she did the new Osho No Dimensions Meditation and used our music for it.

“You should have seen,” she said. “The room was packed! Even people who are resident in the commune and usually don’t participate in the meditations, upon hearing the music they came in

and did the meditation. The energy was beautiful and powerful! I am going to take this copy with me back to Pune and present it to the committee that is in charge of the new No Dimensions project.”

A few months later I was back in Pune, and they told me that the people who were to approve the music for the meditation had already turned down a few different music tracks from other musicians, but they really liked the one Zahira had given them and had approved it for the new No Dimensions Meditation! I was so happy and I couldn’t believe it. The meditation needed two music tracks: the first one was supposed to be 40 minutes (our track was 40:12 minutes long! talk about coincidence...) and the second one – for the whirling part – needed to be 15 minutes long. They asked Sirus and me to record the second track there in the ashram. While recording in the studio we asked Ravi to add the sound of his Kora (African harp) on the new whirling track and we also added the sound of a breath on top of ‘The Whirling Plumbers’ that was rhythmically locked in with the Sufi movements. Sirus, Zahira, and I actually ended up all together in the studio for that last “breathing session” into the microphone.

This is life with Osho, so mysterious and moving in such unpredictable ways. So…did I write the music for the No Dimensions? Did Osho write it? Or was it Existence? Ha! I know the answer by now: It’s all one!